If you're not a Jew you can't even really comprehend how much of our time culturally and religiously is spent remembering and discussing all the times over the course of thousands of years people have tried to kill us.

In 2019 in the United States of America, the Jewish community still experiences life-threatening anti-Semitism:

There is a Passover song, “Zog, Maran”, which is structured as a conversation between an Ashkenazi Jew and a Sephardi Jew celebrating under the fear of persecution and murder. It ends:

“And what if your foe should find you?”

“Then we will die singing”

We don’t want more people to have to die singing.

I want it to be an act of theological, spiritual, and moral courage. Not physical, life or death courage. https://t.co/ucWIITV8Rr

Antisemitism is real and being stirred.

We are shocked and alarmed at the second deadly attack on an American synagogue in six months, this time at Congregation Chabad in #Poway, on the last day of Passover. It must serve as another wake-up call that antisemitism is a growing and deadly menace. https://t.co/NXsREnPriw pic.twitter.com/NsyE2WpnFv

If the Jewish and Muslim communities can support one another, then others can–and must–also learn to de-escalate.

Thinking about how moved I was when so many Muslims stepped up to help their Jewish neighbours after the Tree of Life synagogue shooting in Pittsburgh last fall. Hoping to see lots of similar acts of solidarity after the horror in #christchurch.

I know I speak for many when I write that Muslims appreciated the outpouring of love, prayers and support from our Jewish brothers and sisters after the New Zealand mosque shooting. Let us know what our communities can do to help after this latest #Poway synagogue shooting.

Rabbi Yisroel Goldstein, of Chabad of Poway, who was injured in the shooting today, wrote this post in March: 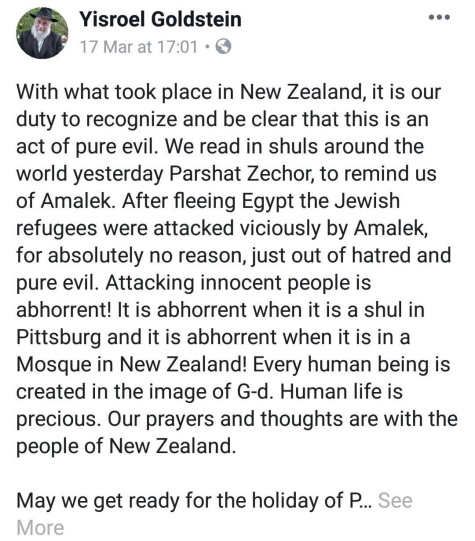 If you would like to help in a concrete way, donations are being collected:

Rabbi, this is a GoFundMe to benefit those who were hurt today. Please share if possible.https://t.co/evHhjqbIBk

Be mindful of neighbors and coworkers who may be very affected by these events and check in with them if you can.

Be safe, and help others feel safe, too. ❤